Our Philosophy
"Agriculture must be the foundation of the country."

In the beginning of Showa-era, Mr. Tasuji Inoue said such a thing whereas he is working as a carpenter who specializes in building shrines and temples. He is my grandfather and he tried to gather people by saying "No prosperity without utilize this land." to cultivate the wilderness around the south-facing slope in Kitaiji, Ikeda, Shodoshima where we have been living.

Through cultivating wooded land, the idea man thought he should run the farm management and hit upon running the public bath by thinking of reuse of logged trees. He started the public bath business using logged trees for fuel purpose because there were not any other public bath businesses at that time. On the other hands, to make the local vegetables’ values higher, he said "Make this place for production area of pickles." and went to Kyoto for studying pickles and also there were lot of houses to craft Somen noodles in winter when is the off season of cultivation and he went out from the island to sell the somen noodles so he was pretty busy. Although none of them could last that long sadly, he was always cheerful and positive. That is reason why the people around him especially his wife; my grandmother was always anxious a lot and had a hard time.

Although he was such a person, he always hoped and thought of regional development and others’ happiness rather than his own matters. It might be the reason why my grandmother looked proud of him and could accompany him. In 1940 he got one mikan citrus tree which was quite rare at that time and planted the tree in the land under cultivation with my uncle Mr. Yoshiro Inoue. I cannot forget my grandfather’s words "Yoshiro! This tree was planted in this memorial year, which is much appreciated." "Please take care well of the first mikan citrus tree of INOUE SEIKOEN, which I planted." often written in the letters sent by the uncle living in Tokyo to encourage my father and me who stayed and maintained the house in the hometown, Shodoshima. The olive history of INOUE SEIKOEN is started by planting olive trees on the land under cultivation by 3 uncles who came back from battlefield in 1946, just after World War II. 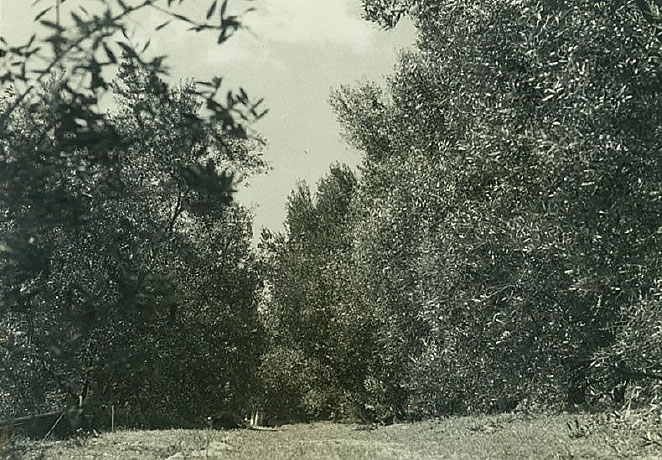 For your information, my father ( the 2nd generation / Mr. Katsuyoshi Inoue) is the 5th son out of 5 sons and 2 daughters. 4th uncle passed away due to peritonitis when he was quite young. The other 3 uncles went to the Pacific War and came back alive. Although my grandparent was quite happy with that, it was quite hard to rejoice freely because there were the fallen or the injured in neighbors. With that, my grandfather called to uncles survived and my father and planted the olive trees. In the following year after the Pacific War, I wonder what Mr. Tasuji Inoue thought of the first olive trees for INOUE family, which is the symbol of peace and prosperity; even though I guess he did not know such story and meaning of olive trees.

3 uncles worked for farming. However actually farming was not that easy and they went to Tokyo gradually for pursuing new jobs there. So my father dreamed to go to cities by seeing his brothers and he planned to leave this island someday but his mother didn’t let him go because she felt misery. Around 1955 when the olives, they had planted, grew enough, my father went to Agricultural Research Institute nearby to learn processing method of olive fruits and started crafting several kinds of olive products by doing tries and errors by himself. At same time the number of visitors to Shodoshima increased gradually, so he thought selling his products to them and also naming his cultivated land. His name is 勝由 ( Katsuyoshi ) and cultivate is 耕す ( tagayasu ) and the land is 園地 ( enchi ) in Japanese so he suggested his company name as 井上勝耕園 ( Inoue Katsukoen ) at the first time.

At the night he suddenly wondered on his bed. "As rethinking they are really appreciated that the sun gave sunlight to all of us and rain gave water to us sometime and also by taking such great favors, olive and citrus trees bloom and bear a lot of fruits at almost exactly same time every year like as they were promised tightly." So he renamed his company 井上誠耕園 ( Inoue Seikoen ), 誠 ( sei ) means sincerity. "We wish to be farmers who cultivate with great appreciation and dedication to the blessing of the nature and the land." 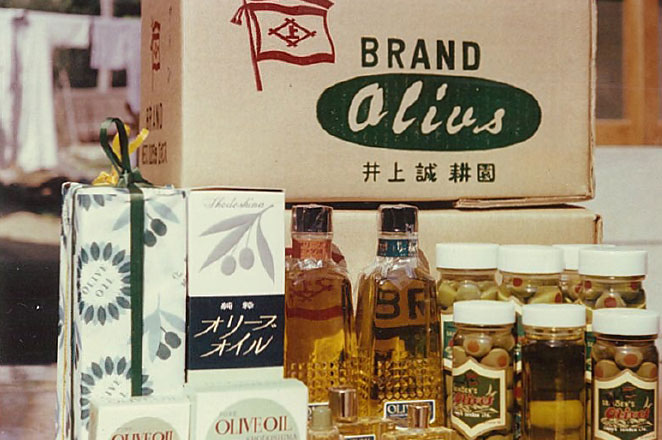 And now, although recently it has been planting olive trees everywhere, it is still increasing the number of abandoned fields in Shodoshima. Thus the scenery of the hill I used to play when I was a child has been changing gradually. That farm road, where used to be surrounded by farms, olive trees, citruses, plums and canola flowers, is now surrounded by just bushes. The farmers working with my father have also retired gradually due to old age. I think we do not need to touch the mountains where human beings have never associated with but it is quite sorry to see such abandoned fields where our ancestors cultivated with sweat without heavy agricultural machine unlike nowadays. Thus I would like to protect such cultivated farms in this island as many as I can. I promise introducing variety of fruits such as olive and citrus trees again in the terraced fields where I used to play around and sending beloved products of such nature goodness to our customers and also I hope to create the farm where can share pleasure and grateful with residents here against blessing and magnificent of nature by a lot of visitors. 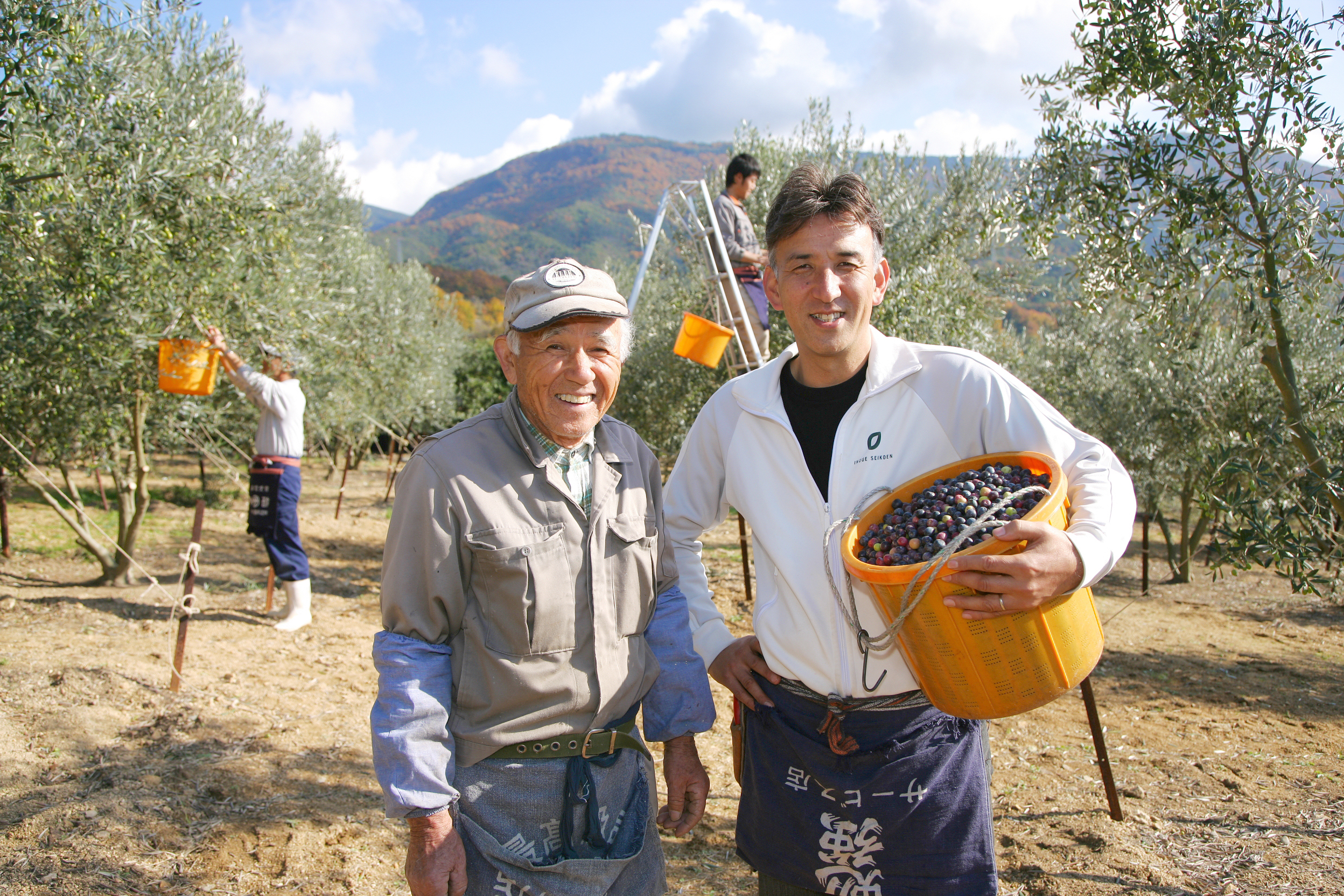 My father is still really fine and also unique and great workmates are gradually coming and working together. We do more and more, so please kindly supporting us.